The Chidakasha Gita of Bhagawan Nityananda 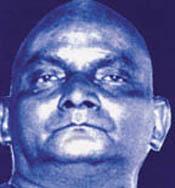 Chidakasha – The Heart space in the head. The Triadic Heart of Shiva.

Bhagawan Nityananda was an avatar, a Janma Siddha, one who is born a God-Realized being. His Grace and his spiritual and healing power were so far reaching that the disciples of several different spiritual paths claim him as their own.

Although he spoke little and it was very difficult to understand everything he said, after much prodding by his disciples, Bhagawan agreed to allow one of his closest disciples, Tulsi Amma, write down his words. This often occurred while he was deep in meditation and began to speak spontaneously in a trance-like state. His words were copied down in this way, over a period of 5-7 years.These writings have become known as the Chidakasha Gita of Bhagawan Nityananda.

Jerry Katz, Director, www.nonduality.com, David Christie, and Surendra Kalyanpur who has published a written edition of it with English translation, in November 2000, for public use.

Gurudev Nityanand Bhagwan has given posterity an invaluable account of “Yoga-Vedanta Knowledge” in his “Chidakashgita.” When he was twenty years, he was full of that divine knowledge known as the glory of the Self. He was then an “Avadhoot” wandering around Mangalore. During that period, it often happened that he would go into trance. During such divine experiences, he would speak out, “Uncle Arjuna, come here. Listen to what Grandfather Krishna has to say.” He would repeat these words again and again.

And there would follow a veritable flow of nectarine words in Chaste Kanarese, words full of Yoga-Vedantic and Spiritual wisdom. These utterances were not specific to a particular place or time or person. A very devoted devotee, whose name was Tulsi Amma, with very great attention and difficulty took them down roughly covering a period from 1920 to 1927 and published a book which, after obtaining permission of Gurudev, she called “CHIDAKASHGITA.” It was published in 1927, in Kannada language.

This is the first authentic record of Swami Nityanand Bhagwan’s teachings that too by a woman devotee, who was a University Graduate in those days when higher education to women was not easily available. Tulsi Amma had observed complete silence for a period of one year at the insistence of Bhagwan. She later delivered religious discourses by the grace of Gurudev at Kundapur in South Karnataka. Her whole life was full of devotion to Nityananda who was a living God to her. She enjoyed a state of complete bliss for a period of nearly fifteen years from 1930. She attained Mahasamadhi in 1945.

The following is a tribute to SADGURUDEV NITYANAND BHAGWAN and we all are very grateful to Tulsiamma for her gift to all the past, present and future devotees of Bhagwan.